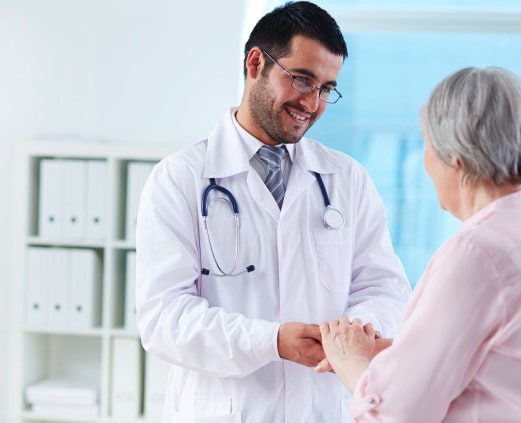 About The Services EIMC provide

The Endoscopy Department of EIMC is located in Nicosia Polyclinic and fully equipped to perform endoscopic examinations with absolute safety. The Endoscopic Department performs diagnostic and therapeutic endoscopic procedures by the pulmonologists and gastroenterologists of EIMC with the assist of our excellent nursing staff. With the help of our excellent nursing staff, they perform all endoscopic procedures in the best possible way, with the sole aim of the well-being of our patients!

Endoscopy is the process that enables the doctor to look inside the human body with the use of an endoscope, a slender and tubular instrument with an illuminated, guided video camera. Since this technique allows the doctor to insert the endoscope directly into the area of interest, the doctor can perform procedures like visual diagnosis, biopsies, and removal of polyps if needed. There are various kinds of endoscopies for different body areas, such as bronchoscopy, gastroscopy, and colonoscopy.

Bronchoscopy is the endoscopic method used by doctors to have a look at the inside of the patient’s airways for diagnostic and therapeutic purposes. The doctor inserts the bronchoscope into the patient’s airways through the nose or mouth (and rarely through a tracheostomy) to operate with anomalies such as tumors, bleeding, foreign bodies, or inflammation. The bronchoscope is an advanced flexible device that contains lighting with video equipment and enables doctors to make a more precise examination and allows them to collect specimens from inside the lungs.

Gastroscopy — also known as upper endoscopy — involves using a thin flexible tube (endoscope) to examine the upper digestive tract. The gastroenterologist, assisted by a nurse, inserts the endoscope into the mouth and travels down the food pipe (esophagus), then into the stomach and first part of the small intestine (duodenum), to view these areas. Gastroscopy usually lasts about 15 minutes.

A colonoscopy is a medical test used to detect changes or abnormalities in the large intestine (colon) and rectum. The procedure uses a thin flexible tube (colonoscope) with a small camera and light at the end. The gastroenterologist assisted by a nurse inserts the colonoscope through the rectum and advanced to the other end of the large intestine. Colonoscopy itself usually lasts about 30 to 60 minutes.

Endobronchial ultrasound (EBUS) is a bronchoscopy method that uses ultrasound to imagine structures close to the central airways (linear EBUS) and lung parenchyma (radial probe EBUS). EBUS is a minimally invasive but highly effective procedure used to diagnose lung cancer, infections, and other diseases, causing enlarged lymph nodes in the chest. It allows doctors to perform a method known as transbronchial needle aspiration (TBNA) to get a tissue or fluid samples from the lungs and surrounding lymph nodes without conventional surgery. Samples are used to diagnose and stage lung cancer, detect infections, and identify inflammatory diseases that affect the lungs, such as sarcoidosis or cancers like lymphoma.

A Sleep Study is used to analyze Sleep Apnea, a sleep disorder that individuals have during their sleep. It is an overnight “in-home” sleep study in the comfort of your own bedroom while wearing a small portable device. Sleep Apnea is the sleep disorder that people face during sleep, which pauses in breathing or when low breathing occurs more often than usual. Every pause or stop of breathing can last from a few seconds up to a few minutes, and they might happen several times a night. This disorder, commonly known as snoring, and those usually affected, experience sleepiness, feel tired during the day, or even are hyperactive.

The main reasons people suffer from sleep apnea, and most of the time are unaware of it, are overweight, allergies, family history, having a narrow upper airway, ineffective pharyngeal dilator muscle during sleep, unstable control of breathing, or airway narrowing during sleep.

The best way to treat sleep apnea is through vital lifestyle changes; stop alcohol and smoking, lose weight, use a breathing device, or even through surgery. If patients ignore or don’t pay any attention to this sleep disorder, they might face high risks of heart attack, stroke, diabetes, heart failure, irregular heartbeat, etc.

People suffering from sleep apnea in midlife have more chances of developing Alzheimer’s in older age. Also, sleep apnea is more common in men than women.

Spirometry is a commonly used test, performed by pulmonologists to assess how well lungs work by measuring how much air you inhale and exhale and how quickly you exhale. This test is used to diagnose asthma, chronic obstructive pulmonary disease, and other conditions that affect breathing.

The equipment that pulmonologists use for this test, called a spirometer, measures the volume of air inspired and expired by the lungs. A spirometer measures ventilation, the movement of air into and out of the lungs.

ECG or electrocardiogram, as most commonly known, records the electrical activity of the heart at rest by attaching electrodes to the surface of the skin of the patient, through a machine called ECG or Electrocardiograph. Cardiologists are using this test in order to interpret the electrical signals, which are triggered by an electrical impulse, as they travel through the heart. As these signals are recorded, doctors can check the patterns between heartbeats and rhythms to diagnose various heart conditions. ECG is being used to measure the rate and regularity of heartbeats, the position and size of the chambers, any damage on the heart, and the effects of drugs or devices used to control the heart, such as artificial pacemakers. Finally, it is a simple and painless test and the results of it can be reported on the same day, thus patients know immediately their results.

Cardiac ultrasound, echocardiography, echocardiogram, or echo, is the heart’s ultrasound and is one of the best preventative examinations for the detection of cardiomyopathies. This test enables cardiologists to diagnose and treat suspected heart diseases, to view the size and shape of the heart, pumping capacity, diastolic function, and other helpful information.

In addition, stress echo may also indicate whether any chest pain or other related symptoms are associated with heart disease. The major advantage of echo is that it has no known risks or side effects and is not invasive.

Also, using a Doppler ultrasound, the doctor can accurately assess the blood flowing through the heart, and this allows doctors to check if the blood flow is normal or abnormal. With a color Doppler, Doctors can identify possible abnormal communications between the left and right sides of the heart, leaking of blood through the valves, as well as have a precise evaluation of the severity of aortic valve stenosis.

A stress test is a test cardiologists use to estimate a patient’s potential risks of having heart disease. It is a simple test since individuals walk on a treadmill or pedal on a static bike, and as you go along, it gets more difficult. Through the stress test, the patient’s electrocardiogram, heart rate, and blood pressure are being tracked. Therefore, the doctor can check how much a patient’s heart can operate before an abnormal rhythm starts of blood flow to the heart muscle drops; in conclusion, doctors can identify how the heart responds when stressed.

Although there are various stress tests, the most commonly used is the treadmill test, where doctors can check how the heart responds while being pushed.

Bone Density Measurement or DΕXA (Dual-Energy X-Ray Absorptiometry) is the test that uses X-rays to determine bone mass. Considered the best test to check bone density, it is widely used to diagnose osteoporosis.

Osteoporosis is a chronic disease of bone metabolism slowly developing over several years. There is a gradual decrease in density and quality of the bone in women AND men, resulting in bones becoming more brittle and thinner. Based on the above, there is a greater risk of bone fracture as their strength and elasticity decrease. Osteoporosis is preventable in most cases.

Prevention is everything; for this reason, women after menopause and men after a certain age, are right to perform this test, regardless of having bone or spine problems.

Please contact us for more information and to schedule a meeting